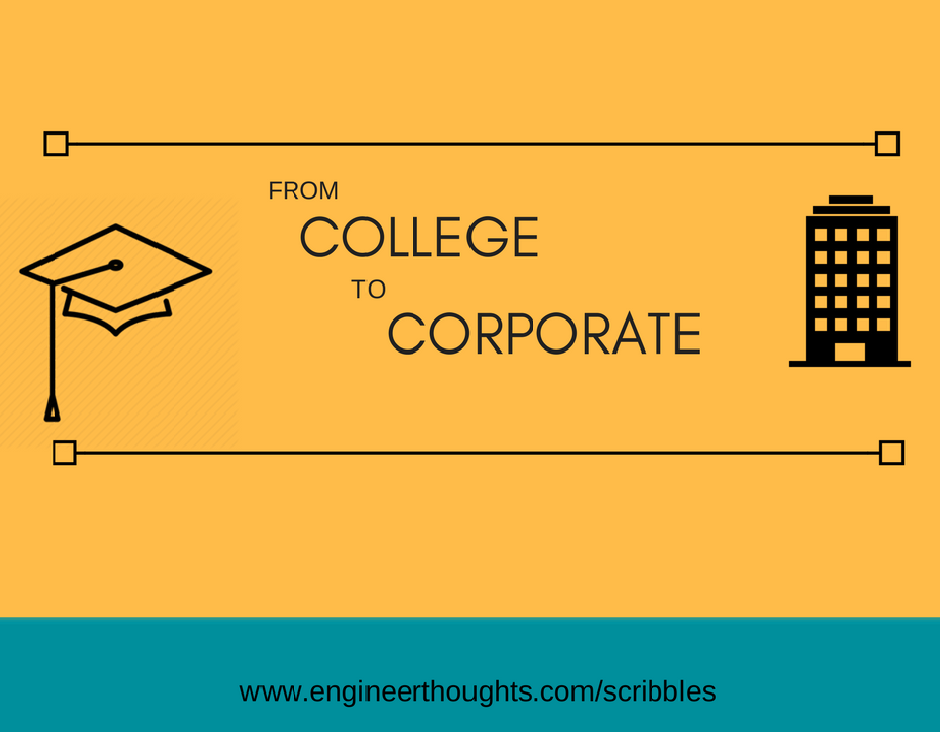 After Completing my Under graduation in Mechanical Engineering with good aggregate, I can’t feel as a complete engineer. This is mainly because of me. I have been lethargic during my studies. I studied only when someone insisted me to do.

I used to open the book the day before the exam and mug up some important questions and vomits them in the exam the next day. Unfortunately, I got some average marks, which made me to do like this for every exam. For the final exams, I would learn some concepts of important topics and present them in my own way in the exam. This kind of thing fetched me some good decent score but I use to forget everything within few days.

I used this technique for all exams until 6th semester. 4th year my life started changing. My Grandfather used to ask me some working of some mechanical components which we use in our day to day life. I can’t explain him and I felt ashamed.

When you enter Final year, the placement starts. You need to prepare aptitude (basic mathematics and some logical questions). I started solving small problems daily which made easy for me during the time of interviews. During placements, your hard works pays 80% of your result and remaining is luck.

I cleared the aptitude round in 1 of the 4 IT companies which came to my college. After clearing it, I went to technical and personal round of interview. I had a chance of telling about my life to them.

I considered myself as a sand hour clock, where one sand at a time can pass through the nozzle at the center. If many goes in at a time it would get stuck and nothing behind goes through. So, I have a habit of doing only one task at a time. But during my final year I started doing multiple task by overcoming my comfort zone. They saw my animation works, other 3d model images and the quality inside me. I got the offer letter a month after the interview process. I felt happy.

The Final year project came. We are separated into groups. I was eagerly doing some new thing which would be useful to the society. I had two ideas in my mind which I planned to do in my project. When I tried to express my ideas, no one in my project was ready to listen. They were in the mind set to complete the project as soon as possible and be in the safer side. So, I decided to give up on my idea. But I was clear on that day like, I am going to do this project on my own after completion of my college.

Then the life goes by. Completed my graduation and became VIP. Everyone in my family started calling me in a nickname called “Dhandapaani”.

I decided to make some tutorial videos on animation in Tamil. I started making one tutorial every week. I started uploading it in a YouTube channel. Then I got the DOJ from the company which I got selected. I felt very happy at first and told my parent about this. They felt happy about it. They started telling everyone whom they met. I felt guilty and then decided to learn some technologies related to IT.

When people asks me about my studies, I used to tell them I completed my graduation in Mechanical Engineering. The next question is, did you get any job? I replied yes. I got a job in an IT company. They asked me, you have studied Engineering in the stream of mechanical, but you got job in IT. Then they used to tell their stories and experience in IT. They used to warn me that you must work day and night. You will be losing your personal life. Their stories made me to think twice to take up this job.

I even got placed in a core company. I went there for getting some details about that company. I approached the watchman and somewhere in the conversation he told that he was earning 9000/-

It was basically a automobile spare part production company. I went in and seen various sections and various processes that is been done in that company. I asked a worker in there about the work life in the company and other things. Finally asked him about the salary. His reply was shocking to me.

He had 2 years’ experience in that company it seems and earning 8000/- which is less than the salary of a watchman in the same company. I respect every job and every person irrespective of their knowledge and position, but that man’s answer gave a shock to me.

Then I was in a dilemma which one to decide. I thought of my family. My father is a retd. bank officer and my mother is a housewife. I have a younger sister who is currently pursuing her under graduate in the field of commerce. For my college fees, my father had taken loan in the bank. So, I decided to get into the world of IT.